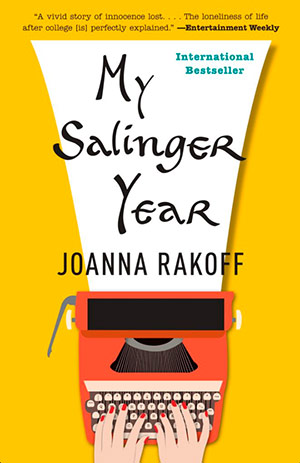 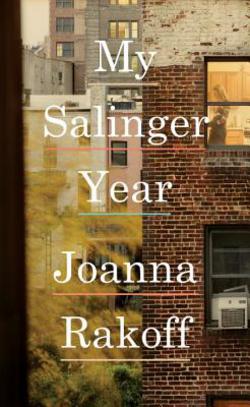 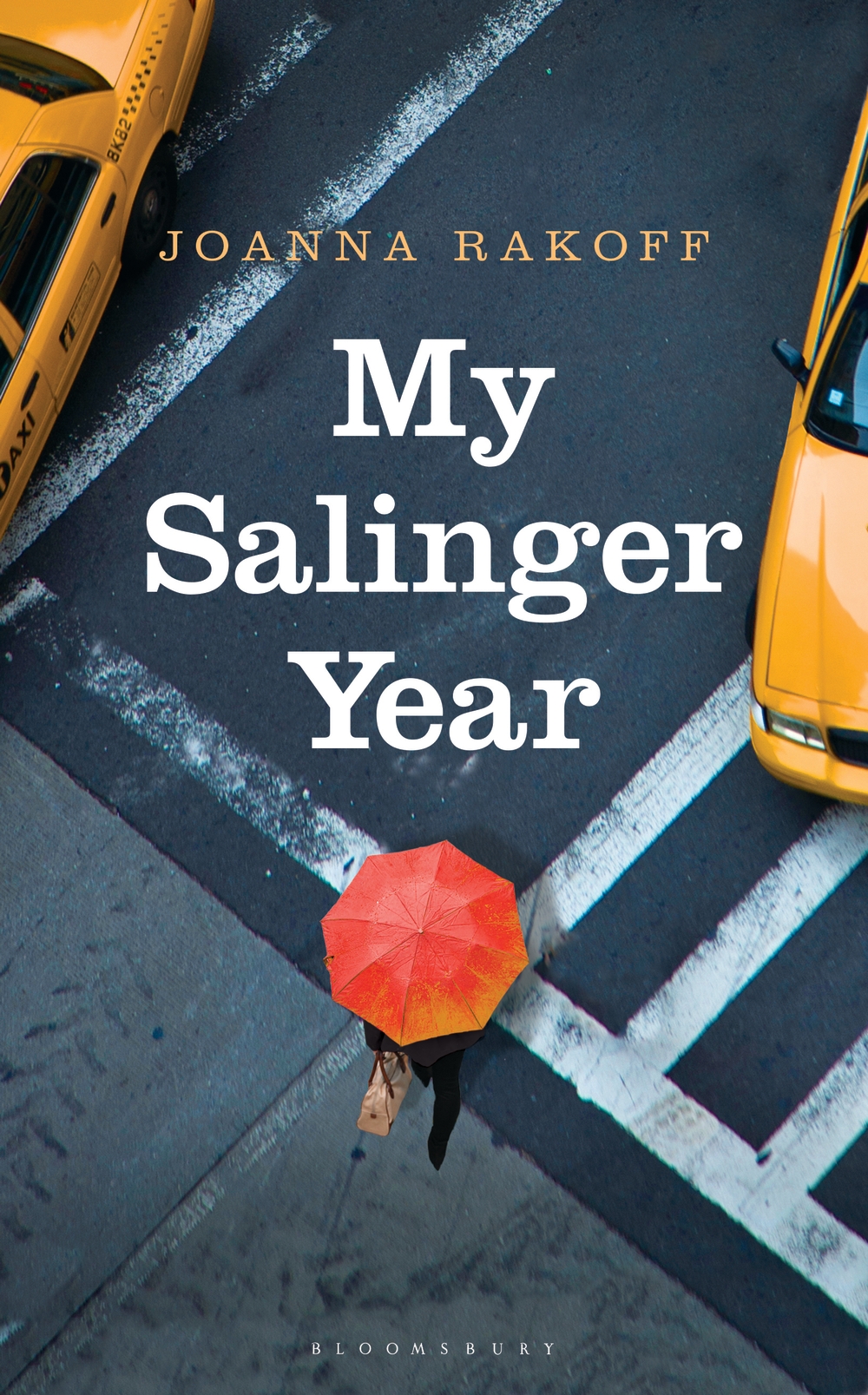 At 23, after leaving graduate school to pursue her dreams of becoming a poet, Joanna Rakoff moves to New York City and takes a job as assistant to the storied literary agent of J. D. Salinger. She spends her days in the plush, wood-paneled agency, where Dictaphones and typewriters still prevail and old-time agents doze at their desks in the late afternoon, and at night she goes home to the tiny, threadbare Williamsburg apartment she shares with her socialist boyfriend. Precariously balanced between glamour and poverty, surrounded by titanic personalities, and struggling to trust her own artistic talent, Joanna is tasked with responding to Salinger’s voluminous fan mail. But as she reads the deeply candid letters from his fans, she finds herself abandoning the agency’s form letter and writing her own responses. Over the course of the year, she finds her own voice by acting as Salinger’s, on her own dangerous and wonderful terms.

Joanna Rakoff paints a vibrant portrait of a bright, hungry young woman moving through a heady and much-longed for world, trying to square romantic aspirations with burgeoning self-awareness, the idea of a life with life itself. My Salinger Year is a graceful, deeply moving literary fairytale and the coming-of-age story of a talented young writer.

“Charming. . . . Glamorous. . . . Rakoff does a marvelous job of capturing a cultural moment—the publishing industry on the cusp of the Internet era—and describing the ambition and anxiety of a young, bright, creative person living beyond her means in an expensive and relentlessly competitive city. . . . What is most admirable is [her] critical intelligence and generosity of spirit.” —The Boston Globe

“My Salinger Year is at heart—and it has lots of heart—an affecting coming-of-age memoir about a naïve, eager literary aspirant. . . . Rakoff wisely—and deftly—weaves her Salinger story into a broader, more universal tale about finding one’s bearings during a pivotal transitional year into real adulthood.” —The Washington Post

“Absorbing . . . Rakoff adeptly capture[s] the uncertainty of youth. . . . A beautifully written tribute to the way things were at the edge of the digital revolution, and also to the evergreen power of literature to guide us through all of life’s transitions.” —Chicago Tribune

“A breezy memoir of being a ‘bright young assistant’ in the mid-1990s . . . Salinger himself makes a cameo appearance. . . . The ‘archaic charms’ of the Agency are comically offset by its refusal to acknowledge the Internet age.” —The New York Times Book Review

“A meditation on how reading shapes our lives, and our lives shape our reading . . . My Salinger Year shows us that the relationship a reader forms with a text and its author can be as all-consuming as the most passionate of real-life encounters . . . captivating.” —BBC

“Beautifully captures a moment in history. This time it’s the New York literary scene in 1996 – an industry about to be dragged kicking and screaming from its comfort zone of wood-panelled libraries and long lunches. Rakoff has produced a coming-of-age memoir for a generation in flux; entirely appropriate, since the figure at its core is the man who, albeit unwittingly, redefined the coming-of-age genre: J. D. Salinger … A warm, witty, occasionally sly piece of storytelling… An affectionate love letter to a first job in an industry that in just 20 years has changed beyond recognition.”—Harpers Bazaar, June 2014

“Like a literary The Devil Wears Prada, this is the story of Joanna Rakoff’s first job in publishing in the ’80s, for the New York agency that represents J.D. Salinger. It’s a peek into old-fashioned publishing: wood-panelled offices, long liquid lunches and a pure love of books. But it’s the added element of a burgeoning yuppie romance (think St. Elmo’s Fire) that makes it an irresistible read.”—Harpers Bazaar, May 2014

“Extraordinary … Gripping and funny … The memoir all literary America is talking about … She has written a coming-of-age story: An involving, evocative tale that will have bookish women everywhere shuddering in recognition. Like Rona Jaffe’s novel of the 50s, The Best of Everything … It is concerned with what it feels like to move to the big city, to take on your first job, and to struggle to survive on a tiny salary when all the while your dreams are seemingly being snuffed out at every turn, and your love life is spiralling into muddle and mayhem. It is about that heady, never-forgotten period in every girl’s life when fear and elation seem almost to be the same thing … The book is so gripping and funny, you feel sure she had only to twitch her nose to be back there, Selectic and all … My Salinger Year is a treat even Jerry might have enjoyed.” —The Observer

“Rakoff is a keen observer. . . . The loneliness of life after college [is] perfectly explained. . . . There’s something Salingeresque about her book: it’s a vivid story of innocence lost.” —Entertainment Weekly

“Funny, warm, emotional . . . powerfully evokes both the angst of early adulthood and life in literary New York in the mid-1990s.” —The Washington Times

“A memoir that serves as a powerful aide-mémoire for readers . . . My Salinger Year is a memoir of firsts: first job, first heartbreak, first publication, and first time reading a writer we’ve all read. If reading it brings back any of these firsts from the reader’s past, then Rakoff has succeeded.” —LA Review of Books

“A wry, absorbing, and entertaining memoir. . . Joanna Rakoff is a pensive, wise, and funny writer who knows when to stop.” —San Francisco Book Review

“At heart this is a book about readers, professional and unprofessional, who hunger for communion with the remote and often troubled authors they revere . . . it is hard not to be charmed by her sepia-toned portrait of a time when a smart young woman in possession of no more than a decent wool suit and rudimentary typing skills could be acculturated into the profession of reading . . . one Rakoff captures with elegance and humor.” —The Millions

“Joanna Rakoff’s delightful memoir, My Salinger Year, which has refreshed my interest in Salinger. . . energizes the denouement of her Salinger year but lifts right off the page.” —Newsday

“This is a funny, delightful, coming-of-age memoir that completely caught me off guard. So absorbing is it that I devoured the whole thing in one sitting.” —Woman & Home

“Her whole story . . . rings achingly true . . . Readers needn’t be ardent Salinger fans to engage with Rakoff’s work: one simply needs to understand the impact established authors can have on aspiring creators. This is vital reading for writers at all junctures of their careers, and for those entrenched in the world of publishing. But there’s plenty to enjoy for readers outside those circles, too. My Salinger Year is about a young woman, a budding writer, who, over the course of a year, developed her sense of self and purpose. That’s something we can all relate to, regardless of our chosen field.”  —Written by Sime

“Salinger haunts the pages of her memoir without becoming the overwhelming focus of it . . . a sparkling memoir that moves limpidly . . . intensely human.” —LiveMint

“She captures perfectly the uncertainty of the newly employed and the absolute lack of knowledge of what others assume to be basic tasks.”—digireado.com

“Rakoff’s memoir reflects on her days working at a New York literary agency during the late 1990s, where she typed out responses to letters from JD Salinger’s fans. The book is billed as “a love letter to the vanishing world of old-fashioned publishing”, which makes it difficult to resist.”—Australian Bookseller + Publisher

“Wonderful and oftentimes humorous insight into the nitty-gritty of the ‘90s publishing world . . . a beautiful narrative of new adulthood. My Salinger Year is an entertaining story of a young woman figuring out her future through work, love, and writing in New York.” —Jewish Book Council

“A very rich memoir, enlivened by Rakoff’s note-perfect recollection of scenes and conversations, her humorous but sympathetic portrayal of personalities, including Salinger’s, her strong sense of period and social history. As a depiction of a world on the brink of the Internet and cellphones, My Salinger Year is superb.” —National Post

“My Salinger Year is a lovely ode to books, reading and New York. It’s also an engrossing read about a young woman finding her way in the world.” —The Advocate

“Gentle, funny, closely observed. . . . Covers much more than just Salinger. . . . The special unworldliness of the young literary person, who has reached adulthood without ever knowing or caring much about how the world works, is the real subject of My Salinger Year.” —Tablet Magazine

“Moving. . . . Heartfelt. . . . Rakoff uses Salinger—his fan mail and her favorite character, Franny—to help illuminate her inner life. . . . The memoir is touching, and it’s easy to empathize with how Rakoff, like Franny, is ‘trying to figure out how to live in this world.’”  —USA Today

“My Salinger Year describes its author’s trip down a metaphorical rabbit hole back in 1996. She arrived not in Wonderland, but a place something like it, a New York City firm she calls only the Agency. . . . An outright tribute to the enduring power of J.D. Salinger’s work.” —Salon

“While it may be the Salinger cameo that initially draws readers in, it’s Rakoff’s effortlessly elegant, unhyperbolic prose and poignant coming-of-age story that will keep them engrossed through the very last word.” —BookPage

“Spellbinding … This is a sepia-toned genre, gently nostalgic and typically set in a New York where skyscrapers are clad in more stone than glass and the men still wear hats and ties … You don’t have to be a Salinger fan to fall under Rakoff’s spell; I’m not and I did. Her book is a deft portrait of a vanishing culture (for traditional book publishing was more a culture than a business): quaint and at times wilfully obtuse, but admirably devote to the dignity of the written word. Above all, My Salinger Year is the tale of a young woman accustomed to having her life’s course dictated by others … As she comes to the realization that it is time to grow up … It is the kind of story that is happening all around us, all the time. But there’s no grander setting for it than New York” —Laura Miller, The Guardian

“Hard to put down. . . . Demands sympathy, admiration, and attention. . . . The details about Salinger are fascinating. . . . What this book is really about, though, is not Salinger, but Rakoff; a coming-of-age tale of a young writer. . . . Irresistible.” —The Sunday Times

“As memoirs go, this is possibly one of the year’s funniest, enthralling and entertaining . . . For an insight into old-fashioned publishing this must be hard to beat. Everyone smokes, returns tiddly from boozy lunches, and authors are treated with respect. It knocks spots off The Devil Wears Prada.” —The Sydney Morning Herald

“Lures you in. . . . A story about growing up and getting better in a rapidly changing industry and world.” —Flavorwire, “June 2014 Books You Must Read”

“Honest, introspective, and completely compelling. . . . Sure to appeal to readers who are obsessed with the enigmatic Salinger, but it is intended for those who have experienced (or are experiencing) their own bluesy, confused, post-college Salinger Year. Rakoff is a careful observer and endearingly human.” —Library Journal

“Sharply observed. . . . Engaging, particularly for its mastery of tone. . . . Rakoff provides good company as she explores the mysteries of the literary world.” —Kirkus Reviews

“This is a vibrant coming-of-age memoir that moves along with momentum and energy, and one only wishes Rakoff had spent more than one year with Salinger so we’d have an even fuller portrait of a man who was and is often misunderstood.” —Publishers Weekly

“Here is a memoir that manages to be dreamlike but sharp, poignant but unsentimental. Here is a book I’m going to have to insist you read immediately.” —Maggie Shipstead, author of national bestseller, Seating Arrangements

“The writing is beautiful, and the story takes me back to my first days in New York . . . The best thing I’ve read in ages.” —J. Courtney Sullivan

“Every young person who moves to New York with creative ambitions should read Joanna Rakoff’s wonderful memoir of being young and literary in the late 1990s. . . . Full of insight into work, love and the pursuit of an artistic life.” —Adelle Waldman, author of The Love Affairs of Nathaniel P.